2019 has been such an amazing year for our Competitive teams.  We wanted to spend some time and share with you all some of the things our teams have been able to accomplish over the last few months. If you have any special moments you wanted to highlight with us, please post your favorite moments on social media and don’t forget to use the hashtag #ThisIsEastside! Enjoy!

The G04 Red II team faced a lot of adversity in the competition after battling some quality opponents throughout each stage of their Cup run.  The girls dug deep and showed a tremendous amount of heart and grit.  The girls battled their way to the Finals of the President’s Cup, but wound up falling short in a penalty shootout that would ultimately decide the winner. It was a successful run from our girls and we couldn’t be more proud of their performances they had throughout the 2019 season. 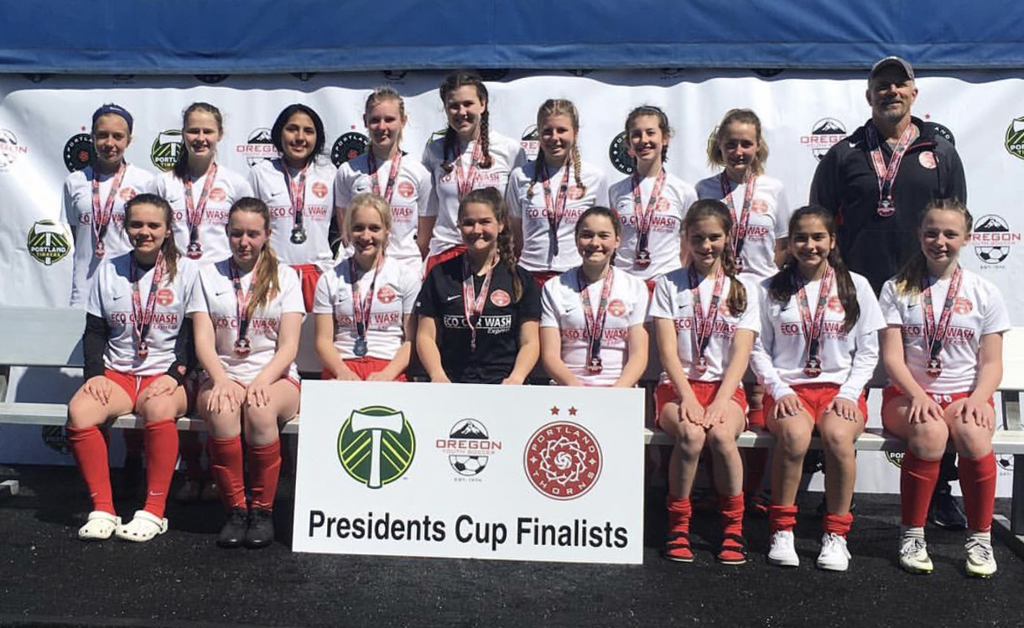 Our B02 Black team entered the competition as the reigning Champs from the 2018 season.  The road back to the Final was not going to be easy.  In the group stage, the boys came out on top as the #1 seed, despite being placed in a tough group.  In the first round of the knockout stage, the B02 Black team faced off against our very own Eastside Timbers B02 Black II team at the Eastside Timbers Sports Complex.  The club derby match was filled with several highlights from both squads, but the ultimately, the B02 Black team came out on top after 90 minutes.

After a massive 7-1 victory in the Semifinal, the boys advanced to the Finals of the competition to face-off against another familiar foe.  The boys faced off against Rogue United FC, a team that our boys faced off against in the finals of the 2018 Presidents Cup and a team that the B02 Black team competed against in the group stage of this years 2019 competition.  Despite playing a man down during the final, Coach Rex & our boys found a way to get a result and take home their 2nd consecutive President's Cup title after a narrow 2-1 victory. All the hard work that the boys put in over the season paid off once again and we are looking forward to the future and seeing this team compete on the next stage. 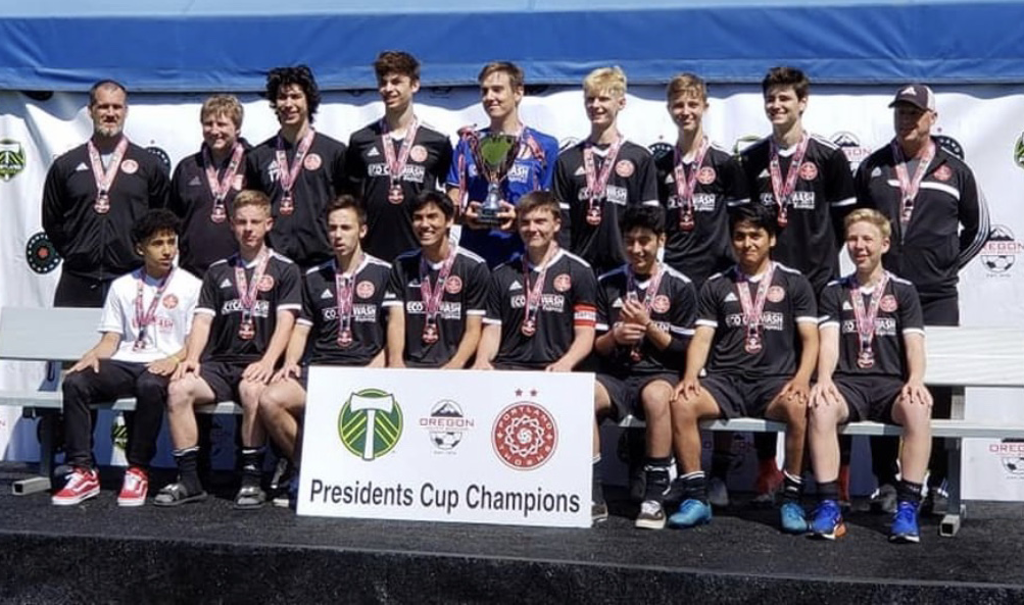 This year, we had 15 teams represent our club at the OYSA State Cup competition; 8 Eastside Timbers teams and 7 Eastside Thorns FC teams.  It is hard to cover every single team’s successful run, but there are a few things we wanted to highlight from this year's State Cup!

Out of the 15 teams that competed, we had 6 teams that entered the knockout stages of the competition by being sealing #1 seed in their respective groups: B08, B07, B03, B02, G04 & G02 Red teams.  The G07, B06, & B01 Red teams also advanced by earning a second-place finish from the group stages. Of the 9 teams that entered the knockout stages, 8 teams advanced to at least the semifinals of State Cup.  Our club was tied for 1st with teams represented at the Semifinal's stage of the competition.

Of the 8 teams that competed in the Semifinals, 3 teams advanced to the State Cup Finals; G04, B03, and G02 Red teams.  Coach Joey Leonetti and the B03 Red team entered the State Cup Final with a ton of momentum.  The boys had the best goal differential in their age group when they exited the group stage and had just come off an emotional penalty shootout victory in their Semifinal matchup.  The boys were motivated and came out and dominated the first half of the Final and grabbed an early goal to take a 1-0 lead heading into halftime.  In the second half, the opposition picked up their intensity, but the boys weathered the storm and seized the moment as they took home their first State Cup title as a group.  The boys rose above the adversity and we are proud of what they’ve been able to accomplish this Cup season! 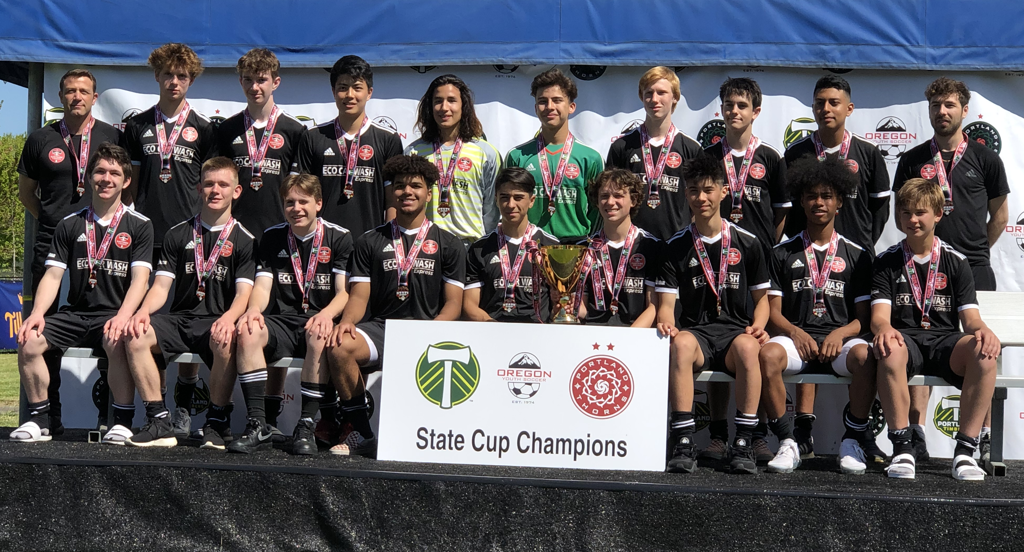 The G02 Red team were on fire heading into their State Cup Final.  In the previous 4 matches of the competition, the girls had scored a total of 19 goals, including a whopping 5 goal victory in the Semifinals.  However, the girls were facing off against the defending State Champions from 2018 and the team that eliminated them the previous State Cup.  This was always going to be a tough matchup, but the team knew that this was going to be their best opportunity to capitalize.  After an intense and action-packed matchup, the teams entered a penalty shootout after regulation and overtime couldn’t decide a winner.  In the tense moments of the penalty shootout, Goalkeeper Emma Carstens was number 6 in the shooting order. Emma stepped up to the spot and buried her penalty.  Emma followed up her goal with a fantastic’ walk-off save off the post that helped Coach Sharla Topaum and the G02 Red squad to their first State Cup Title as a team! The team showed a tremendous amount of resiliency and we are glad to see all of their hard work pay off this Cup season! 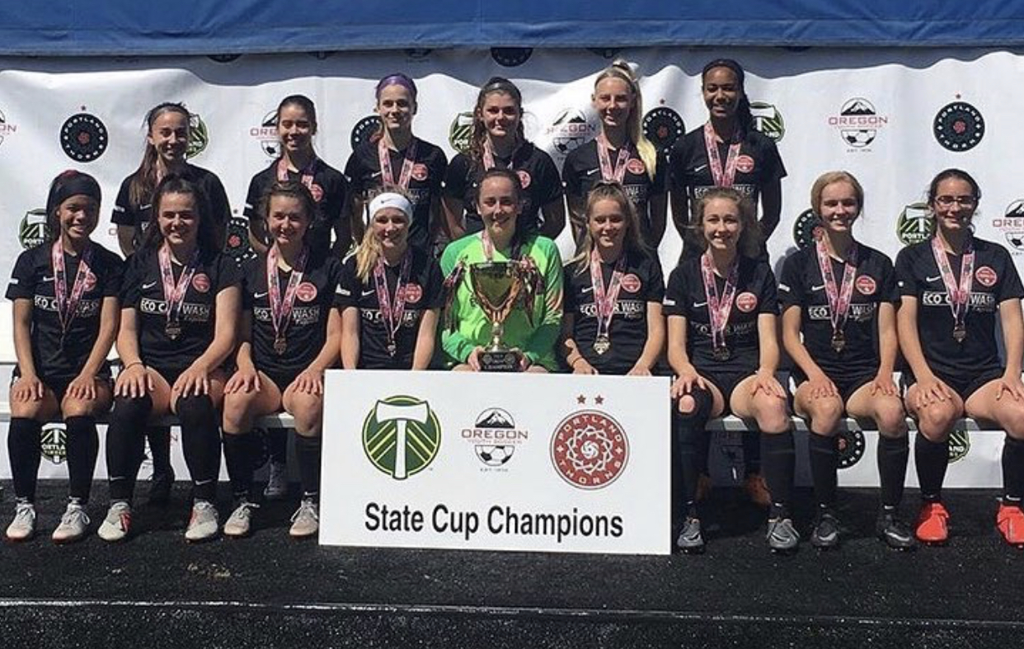 The final team that entered the State Cup Final was the G04 Red team. The G04 Red squad were the reigning back-to-back State Cup Champions, but the girls were eager to get themselves a third consecutive title.  After a convincing 5-0 win in the first round of the knockout stage, the girls had a rollercoaster of a game in the semifinals.  The girls wound up coming from behind late and sealing a 3-2 victory to send them to the Finals. In the Finals, the girls faced off against the team they sent home in the knockout stages of the 2018 last season. This was always bound to be an intense Final's matchup. After a heated contest and solid performances from both teams, the G04 Red team came away with an exciting 4-3 victory, giving them their 3rd consecutive State Cup Title! This team has so much talent and it is a joy  to watch them compete, regardless of what stage they are playing on.  Successfully completing a State Cup run is difficult to do, but to do it 3 years in a row is next level. Couldn't be more proud of this team! 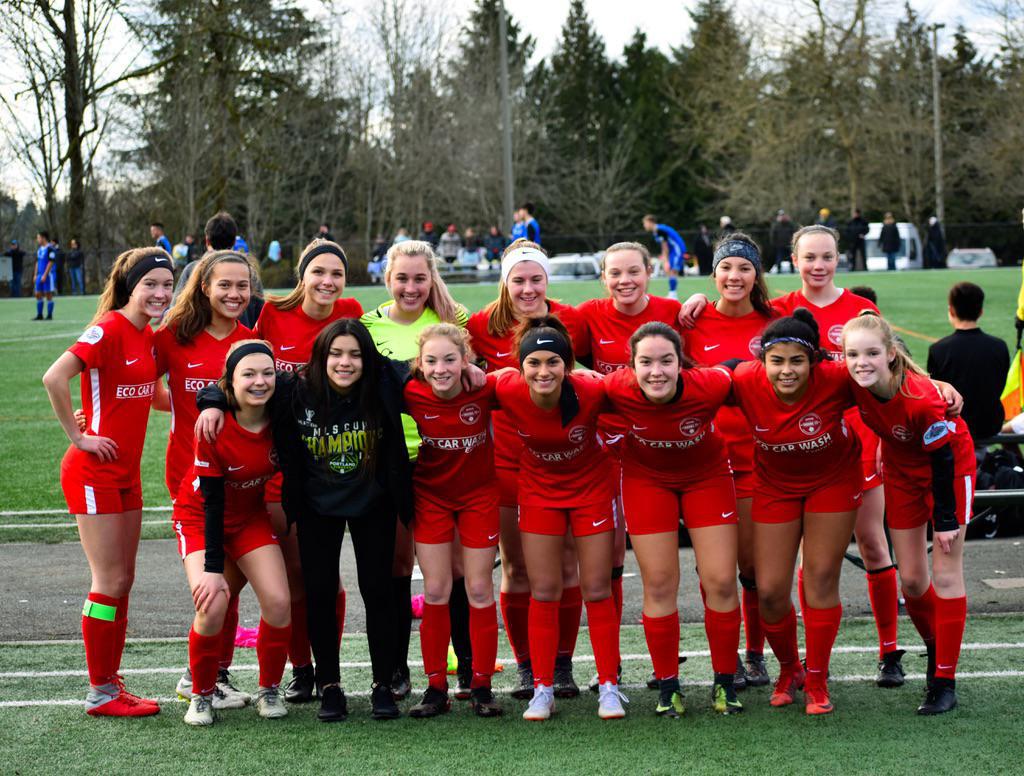 This Summer, the Far West Regional & Presidents Cup Championships will be held in Boise, Idaho & Norco, California. We will have 4 teams representing our club at these competitions.

At the Far West Presidents Cup, Coach Rex and our Eastside Timbers B02 Black team will be competing June 11th-16th in Norco, California.  The B02 Black squad is the reigning back-to-back Oregon Presidents Cup Champion and earlier this year, the boys also traveled down to Arizona and took home the 2019 Presidents Day Tournament title! The boys have put together some excellent team performances this year and we are excited to see them compete at the next stage!

At the Far West Regional Championships, we will have 3 teams representing our club.  Coach Sharla Topaum and the G02 Red team will be venturing to Boise for the first time as State Cup Champions.  The girls are ready for the challenge and are excited to compete at the next level.  The girls have been training hard over the last few weeks and look ready to make their mark at Regionals.

Coach Joey Leonetti and the B03 Red team are also traveling to Boise after achieving their 1st State Cup title as a team.  Coach Glenn Rogers, who will be taking over the team for the Fall season, will also be accompanying the team to Boise.  This will be a great challenge for the team and we are excited to see how the boys respond to the next level!

For the  G04 Red team, this is familiar territory.  The G04 Red team are the three-time State Cup Champions and this will be their 3rd consecutive trip to the Far West Regional Championships.  The girls missed out on the knockout stages last year by 1 point, but the girls will look to capitalize on this opportunity to advance and hopefully compete in the knockout stages & beyond. We are looking forward to seeing this team compete!

This concludes our 2019 Cup season recap! If you have any special moments you would like to share with us, please post your favorite moments using the hashtag #ThisIsEastside! You can also reach out to us using the email info@eastsidetimbers.com.  Go Eastside!!!

After an  eventful week in Boise, the G04, B03, & G02 Red teams have returned home from USYS Regionals.  All three teams showcased  their talents well against some top competition, and it  was a tremendous experience for our players, teams, and coaches.

The G02 Red team came home with a 1-2 record as they competed against some top teams from Cal-South, Colorado, and Idaho.  The girls played well in all three matches, but the team really came together in their final  game when they won in a thrilling match 5-3 against U17G Inferno from Idaho.  The girls strung together several exciting moments together and we are excited to share some of those moments in the near future.   Stay tuned!

The B03 Red group came home  with a 1-1-1 record as they competed against teams from Arizona, Idaho, & Utah. The boys played with an exhilarating amount of pace and the tempo was high for every match.  The highlight performance came against Boise Timbers PA when the boys unleashed their offensive firepower and came away with a massive 4-1 victory to keep them in contention of advancing.  The boys put together some fantastic highlights, and we will be sharing some of those highlights in the near future.  Well done boys!

The third and  final team from our club to compete at regionals was  the G04 Red team who came away with a 2-1 record against teams from Hawaii, Alaska, & Colorado.  The girls narrowly missed out on the knockout stages as they were edged out by a head-to-head result against Hawaii from their opening matchup.   Despite the tough start, the girls played fantastic in their final two matchups and put themselves in the best position to advance to the next stage.  The girls ended their campaign with a big  4-1 victory against a team Colorado.  We will be sharing some highlights of the 04s in the future as well, so don't forget to follow our social media platforms below!

We are fortunate and thankful for the opportunity for our boys  and  girls to compete on such a big stage in front of our fans and several college coaches from around the country.  This was a great experience for our teams and our players are motivated now more than ever to make a return next season to compete on this grand stage.  When you get the chance, please follow us on our social media platforms, and don't forget to post your favorite moments  from regionals using the hashtag #ThisIsEastside! 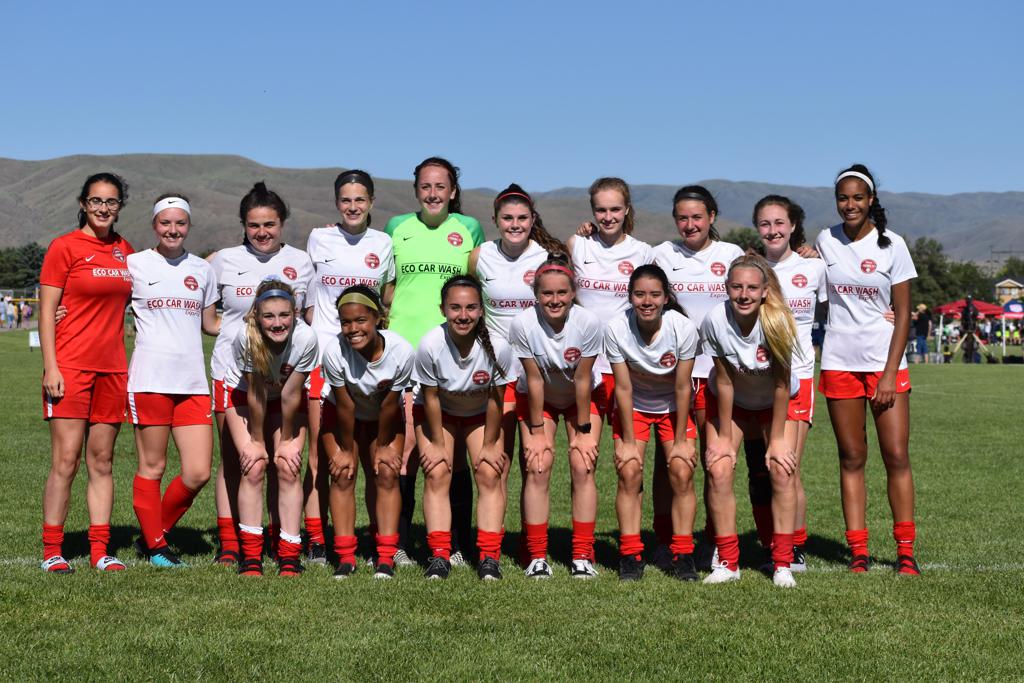 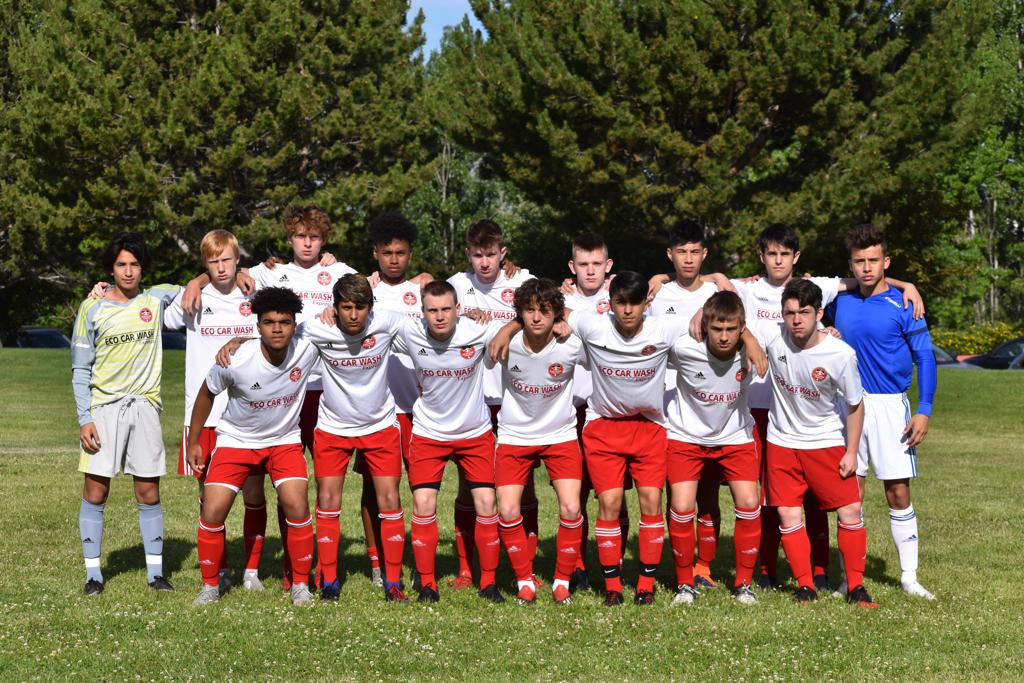 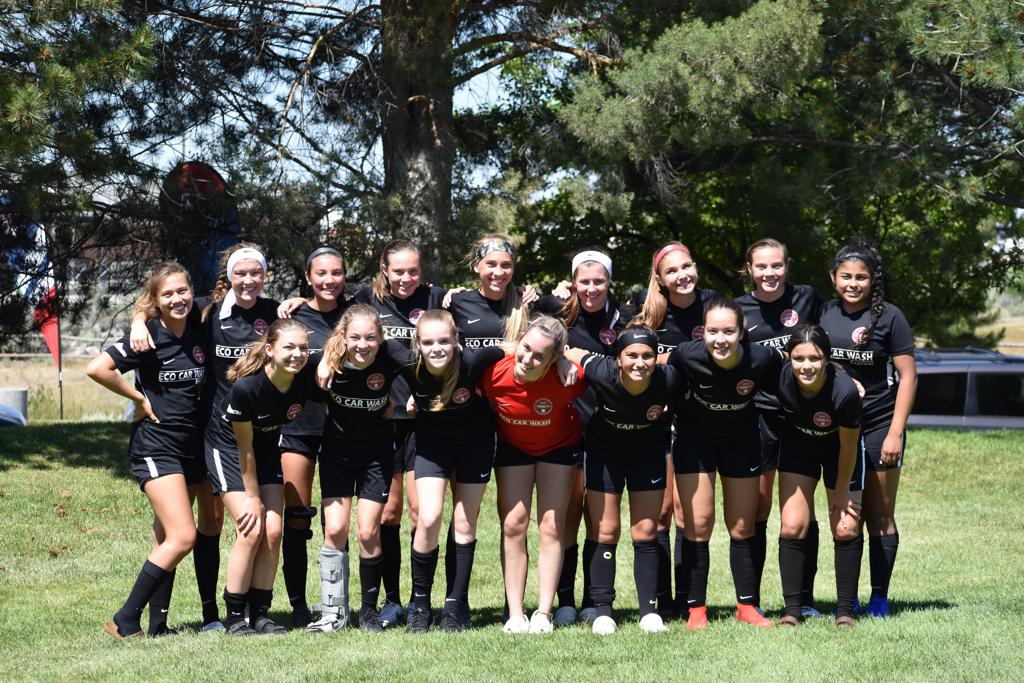